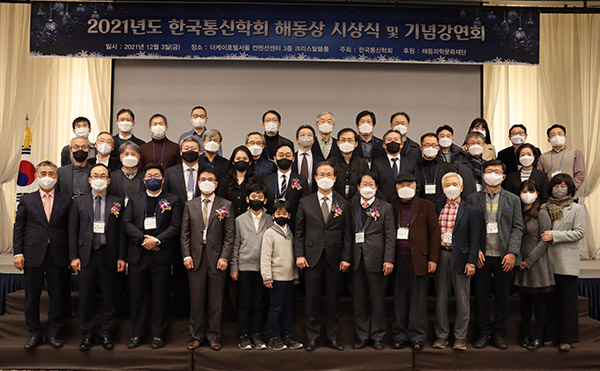 On Friday, December 3rd, the 17th Haedong Awards, the 3rd KICS Fellow Awards, and the year-end party were held at the Crystal Ballroom on the 3rd floor of the Convention Center at the K Hotel Seoul. In accordance with COVID-19 Guidelines, those who have received a second dose of vaccine were allowed to participate.

The Haedong Awards, sponsored by the Haedong Science and Culture Foundation, is granted to the five institutes including KICS, the Korean Institute of Communications and Information Sciences. At this time around, Prof. Oh-Soon Shin at Soongsil University won the 17th Haedong Academic Awards and Seung-chan Bang, SVP at Electronics and Telecommunications Research Institute (ETRI) won the Haedong Technology Grand Awards. The Haedong Young Engineer Award in the research area went to Prof. Nam yoon Lee at Pohang University of Science and Technology, and the Young Engineer Award in the technology area was given to Dong woo Lee, a principal research engineer at Samsung Electronics.

As an expert in wireless communications, Professor Oh-Soon Shin was recognized for his 20+ years of contribution to wireless network technology research.

Mr. Seung-chan Bang  has contributed to the development from IMT-2000 to LTE and 5G communications, leading ETRI’s Telecommunications & Media Research Lab as one of the best experts in mobile communications.

Professor Nam yoon Lee was recognized for his active contribution with his 48 dissertations registered in SCIE.

Mr. Dong woo Lee, the principal research engineer, was recognized for his contribution to the development of the communication industry, including registration of more than 20 patents that are critical to 5G and LTE communications.

At the awards, Younghan Kim, President of KICS, and Yeong-jae Kim, Chairman of the Haedong Foundation, awarded prizes.

Professor Dong ku Kim was recognized for his efforts in mobile communication technology, having released more than 400 papers and 100 patents over the last 27 years.

Professor Sae woong Bahk was selected for his 30 years of efforts comprising around 300 papers and 100 patents, including papers on the optimization of wired/wireless network protocols.

Professor Sung rae Cho was recognized for his accomplishments in his 27 years of research in MEC resource allocation of wireless networks, about 280 papers, and 80 patents.

The KICS Fellow is an honored class of membership granted annually to only a few outstanding researchers selected among the top 1% of KICS members.